Now some may not see much point in doing any kit building when there is a quality Ready-To-Run version on the market. I would agree in the case of the Victorian Railways 'E' type carriages which have been reproduced in RTR form by the likes of Auscision Models in recent years (2011 actually with a re-run in 2016). They have done the AE,BE and ABE type cars as well as the CE guard's van.

Photo of the ABE car from the Auscision Models website
They are nice models I have to admit (I have the above ABE as well as a Blue and Gold CE van) but they are not always available and the kit-builder in me would one day like to add a couple of the AE and BE cars to the roster. For many years the way this could be done was to buy the Steam Era Models 'E' car kits and make them up yourself. Now it is important to note for those that don't already know: the SEM 'E' car kits are not strictly a 'E' type car. You are given enough parts from the 'W' type car kits, also produced by SEM, to make them into 'E' cars. It is, as they say in modelling terms, a 'kit-bash'.

So why have I done this post? Well I was asked recently if I had built any of these kits (no....I haven't) and for some help in interpreting the instructions for making up the sides. Since it may come in handy for myself in the future or anyone who wants to build these kits I have had a go at making up some diagrams to compliment the SEM instructions of how to cut and splice the sides together.

So here they are. The first diagram is for the AE (which makes the AW car sides with 6 compartments into the AE which has 8 compartments): 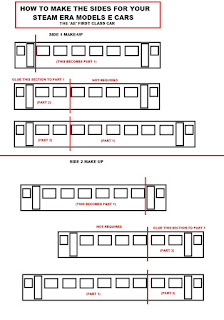 And this is the diagram for the BE (which makes the BW car sides with 7 compartments into the BE which has 9 compartments): 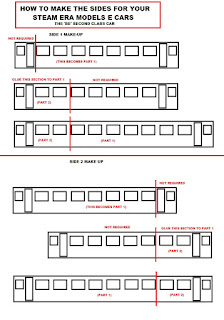 Clear as mud? It was a challenge to work out but I think it does the trick (well ok the 'theory' does). Let me know if you build any 'E' car kits this way and if they were successful (or not). Now I just have to do do my own.