What a load of Phosphate...again

Well things happened a lot quicker than I expected and the model is now ready for the road: 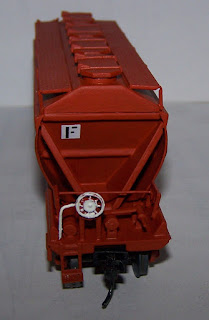 One thing I will have to remember for the next kit I build from Railmotor Models is that the decals are a bit of a pain. The large VR logos started coming apart when I tried sliding them off the backing paper. The smaller decals I didn't have a problem with.

The next planned job is to finish some Z vans for a client.

What a load of Phosphate!

Between 1974-78 the Victorian Railways introduced a series of hopper wagons of the same basic construction but featured different discharge doors and 5 featured closed roofs. The JPF wagon was a class of 10 built to carry phosphate (hence the ‘P’ in the code). The other types were JAF (Soda Ash), JBF (Briquettes), JCX (Cement), JDX (Dolomite) JSF (Sand), and JQF (Quarry). They received 4-letter coding in 1979.

This kit is from the Railmotor Models range. It was a prize won at the Morwell Exhibition back in June (and I’ll take this opportunity to thank the person who passed the kit on to me as they did not want it). This kit was going to sit in the stockpile of other kits awaiting assembly but having completed the HZB wagon (as seen a couple of posts back) I decided to bring it forward in the que as I had most of the bits I needed on hand already. About the only extra items I needed was a pair of Steam Era Models XSC Silver Spring bogies. Assembly has taken about a week, usually done at night when there is stuff all on the TV worth watching. It was just going to be the basic wagon with shunter’s steps and a handrail fitted at each end. But when I researched the prototype and found a couple of good pictures plus a diagram on Mark Bau’s Victorian Railways website, I decided it was worth adding a bit more detail. So it has the handrails at the top of the ladder, some piping that appears on the handbrake side along the discharge chutes as well as the rods for the door slides, extra steps on the sides and ends and the linkage for the grade control. Kadee #158 couplers are fitted as well: 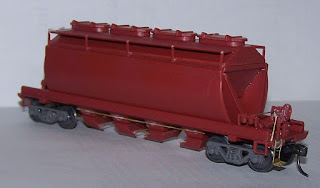 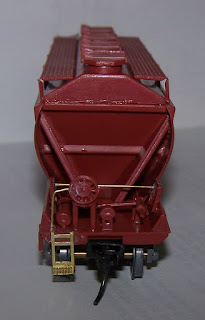 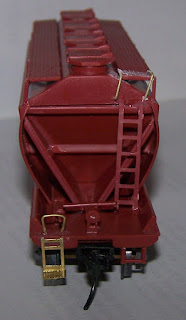 The model will have the usual test run at the local model railway club, then prepared for painting which might take a week or two depending on weather and time available.
Posted by Unknown at 18:22 No comments:

Well I'm not quite ready to post a picture or two of the next build project. But I thought I would cover something else in the motive power department: 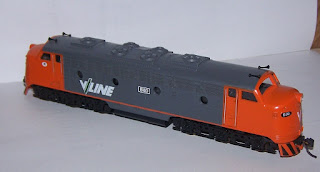 This Lima B-class came into my workshop to have a pilot re-attached plus a bit of a service. At some stage it has been converted from the old 'dunny seat' couplers to Kadees while using the original Lima pilot. The Lima B-class was first introduced onto the market in the early 1990s following the success of the Lima S-class (not the NSW 44-class repaint version by the way). Until this model came along it was common for modellers to buy two S-class and use the Bulldog cab off one to stick on the other end (after chopping the...errr...'B' end off first). So what became of the leftover bits? Well some made a...errr... 'B' unit by sticking the remaining rear end chopped off onto the other body. Unfortunately I don't have a photo to show this but it was a good way to use the leftover parts.

So in this post I thought I would do a quick comparison of the Lima B-class against the newer Auscision model which came out in 2009:

Now there is no question that the Auscision model is more detailed and has a superior mechanism to the ringfield motor used on the Lima model. It also caters for the DCC market by having a 8-pin plug to fit a plug-and-play decoder (though this may change to the 21-pin arrangement going by what Auscision have done with the recent re-run of the A-class). Anyway enough of the sales pitch, here is some pretty pictures of the pair together: 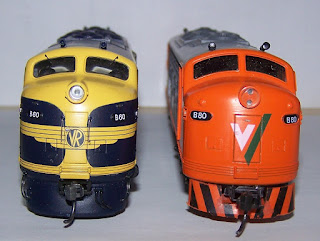 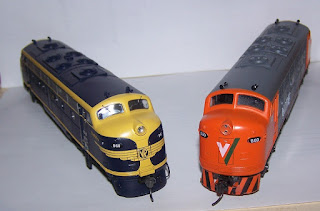 As happy as I am with my Auscision model (except for the grills coming off as it is from the very first batch made) I would make room for the Lima one in my fleet to show off where the hobby was 25 years ago compared to the offering today. Another comparison could be made with the brass B-class models produced by Alco Models in the 1980s and the one produced by Precision Scale Models in 1992. One day maybe.....

Just on a month since I purchased this kit, it has been painted and decaled, ready for traffic:

The railways had a bogie wagon that was modified for the same purpose and maybe it will be a project for the future. It differed from the 4-wheel version in that it had a raised section in the middle and the floor sloped towards the ends and was coded VZBF in V/line service. In typical Victorian Railways fashion and like the HZB it was modified from an existing wagon the railways no longer needed in regular traffic: 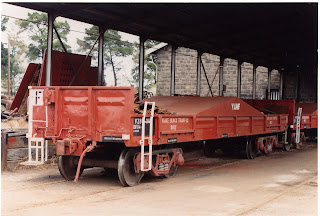 Photo from Norm Bray's Flickr site: https://www.flickr.com/photos/60901191@N08/
The next project has already been started and a blog post on that is coming sometime later in the week.