You rang for a U van?

The Steam Era Models U van kit has been around for 30 odd years, having been originally released under the Broad Gauge Models brand in the 1980s. The model was starting to become a little dated so it has been recently upgraded to meet today's standards. Separate etched handrails and other details such as the handbrake are now included in a brass fret in the kit (previously one had to buy a handbrake etch as an optional part separately). The biggest change is the roof, which has been changed to a corrugated iron version rather than the plain roof. The model looks very smart and is comparable to the RTR offers of Auscision if built well: 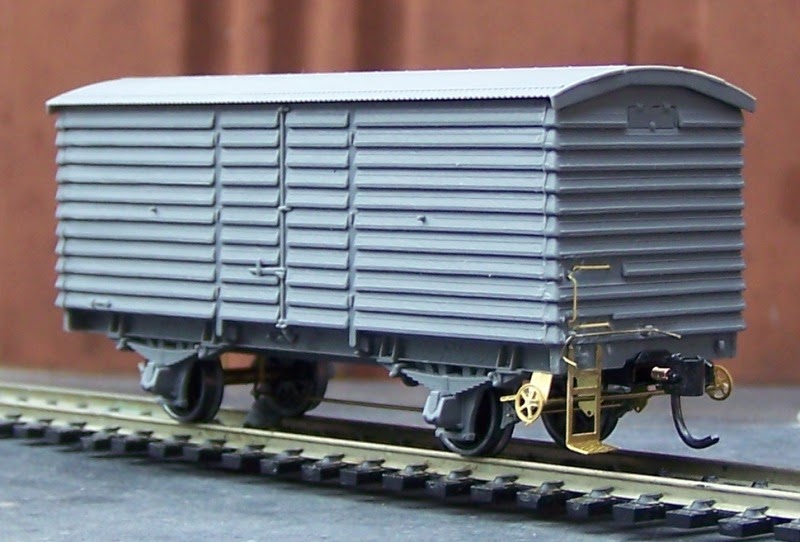 This model is now in the process of being painted. I'm trying a new paint on this model, Humbrol #100 red brown which is a fairly close match to VR wagon red in my eyes. I shall see how it turns out.

Been a few months since I put up a picture of the first container wagon I built. Since then it has been painted, along with two more:

Each wagon is loaded with two 20ft containers. The containers are a Walthers product and come supplied already painted and lettered. The real fun I had with building the wagons was not so much the construction side but more applying the decals. Each side has 11 decals (10 if you opt not to apply the VR logos) and it can be hard reading the fine white print on the blue decal backing paper. Thankfully Steam Era supply an excellent diagram in the instructions that have the harder to read ones blown up. With these 3 done work has just been completed on building number 4 and is now ready for paint. My aim is to have a train of about 10 wagons depending on how many I can fit into one of Auscision's gold storage boxes. When finished I will have a train suitable for haulage by some of my more modern locomotives such as a A-class, C-class and hopefully a future Austrains G-class.
Posted by Unknown at 19:13 No comments: