With the T-van going through the paint shop presently (and not looking too bad thus far I have to say, even without the lettering on yet) it is time to reveal the other project.

A couple of years ago the local model rail club I'm part of was donated some jigs and materials to make 'Fast Tracks' point/turnout (see this link for more information). It came with the 'fixture', as they call them, to make a #6 point/turnout, Printed Circuit Board sleepers, a filing tool to make the point frog and point blades, several lengths of Code 83 rail, laser-cut wooden sleepers and a tube of Pilobond to stick them to the point along with a helpful CD/DVD on how to construct the assemblies. I decided to make a left-hand one first and here it was early in the build on the fixture:

At this stage the frog was not soldered in place and the point blade rails were yet to be done. These fixtures make the job so much easier than some other hand-made point/turnout kits I have seen. The manufacturer claims that once you become competent you can build a point/turnout in about 45 minutes. Well since this is my first it has taken a bit longer. Thanks to there being bugger all on TV in the evenings (suprise suprise) I have spent about an hour each night over the last 4 days putting it together. Mainly with the help of the supplied CD/DVD which contains plans and how-to videos on each step.

So here is where I'm up to now:

Those with a keen eye will notice a couple of things. It does not have the timber sleepers on yet because I cannot find them at present (at worst I can use PCB ones with the suitable isolation provided). It also does not have the rails cut to provide isolation for the frog yet (it will be done once the point/turnout is fully timbered). The guard rails have been formed and fitted and the point frog soldered in place. The final one is that the point blades and the rails up to the frog are both one piece. You can build these points/turnouts this way or you can have a hinged section closer to the throwbar.

So until I find those timber sleepers I will construct a right-hand one to the same stage as this one. Then they just need a layout to go on.

Yep there has been another pause in work. Mainly due to other things taking priority. With the weather getting better (well...sort of) for painting and a couple of projects that require finishing still this blog will start to get busy again.

Now having said that some projects need to be finished, I have snuck in a couple of extra ones. This post will focus on the first of these. A week ago I attended the Sunbury Model Railway Exhibition to help run the layout 'Town and Country' over the weekend. It was a good exhibition with at least a couple of new layouts making their exhibition debut. I was intending not to make many purchases unless it was something that I could put together reasonably quick. So what did I buy? 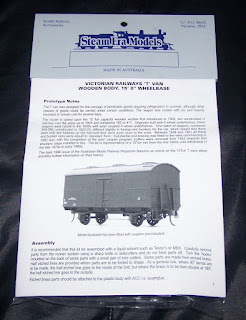 Yep I got myself a Steam Era Models 15ft T-van kit. This kit has recently been updated with mitered corners to join the body together, separate roof battens so you can replace the molded on ones if desired, plus a brass etch with all the bits to make up the handbrake details and the handrails.It is a big step up from the older version of the kit which dates back to the days of David Foulkes producing them as part of the Broad Gauge Models brand in the 1980s.

Seeing it came with all the extra bits I decided to make this one more detailed than one of my previous builds of the older version of this kit. Those details can be seen in the following photo of the model now almost ready for paint: 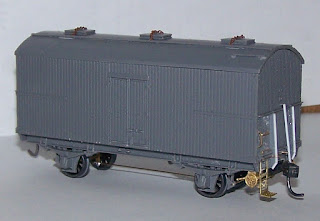 So I replaced the roof batterns with the separately supplied moldings, added chain that secured the ice hatches on the prototype and added the extra iron details to the ends as suggested in the kit instructions. The only thing still missing are the safety loops for the brake rigging which I will add before the paint goes on.

Now it would be simple to paint this wagon in the traditional VR wagon red. But that isn't on the cards for this one. I have something a bit more interesting planned for it.

The next blog post will be about the other project I've started working on and by the time that post comes around I should have something more to show of it.