A couple of posts ago I compared two VR B-class models from different manufacturers and their differences. Will this post will be doing the same thing with another pair of models of a different locomotive.

The G-class Co-Co diesel locomotive was first introduced in 1984, a year after the Victorian Railways changed to V/line. The first order for G-class was for 5 locomotives, which ended up being fulfilled by using locomotives originally allocated to be built for Australian National as the BL-class. These 5 locomotives, G511-G515, paved the way for further builds. The balance of G-class, G516-G543, was built in two batches. They were used on heavy freight workings and the occasional passenger service, in particular the Sydney-Melbourne express on standard gauge after the demise of the Southern Aurora and Spirit of Progress in 1986. A number of the G-class are still around today working with private operators.

In model form the G-class has been produced by a few different companies over the years. Broad Gauge Models commissioned Samhongsa to produce the first such model in 1986. Dual Gauge Products also produced body kits for the second and third batch Gs. In this post I’m covering the two RTR plastic models produced thus far to date.

The model in the V/line orange and grey livery was produced by Powerline as early as 1989. It represents G521 which is from the second batch of Gs. The model in the ‘what if’ blue and gold livery was produced by Austrains in 2014 and represents a first series G and the long standing joke in the model fraternity that the first G was ‘accidentally’ painted in blue and gold after construction finished at the Clyde Rosewater plant in South Australia. Thus it also carries the now infamous number G220 that has been portrayed on repaints of Powerline G-class by a couple of modellers over the years.

The differences in these models (putting aside liveries and which batch they represent) is many, just like it was with the two B-class models. The Powerline model uses the ring-field motor like the Lima B-class and this motor was offered in the most recent re-release of this same model in the early 2000s. Powerline in both instances offered the model with a single powered bogie or both bogies powered (dual motor). One change in the 2000 re-release was to provide a circuit board for the electrics. However it did not incorporate a DCC plug. The model pictured pre-dates the re-release so it has simple wiring. The Austrains model features all the things you expect of a model produced in recent years including a 5-pole skew-wound motor with flywheels driving the wheels through driveshafts and gear towers as well as a modern circuitboard with a 8-pin DCC plug and the lights provided by LEDs.
Anyway I’ve waffled on again too much, here are some pictures of the pair together: 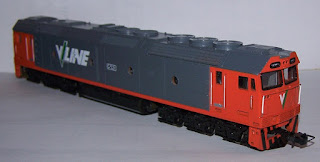 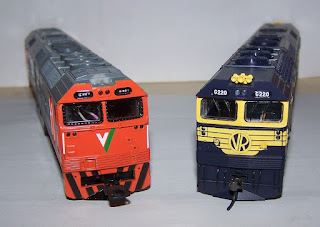 I will be doing another comparison of another ‘then and now’ model in a future post.
Posted by Unknown at 23:52 2 comments:

This is a project that has taken a while to get around to finishing. Happily I can now say that it is finished.

These two Steam Era Models Z vans have been in the works for at least a year. They are a bit different from the previous one I built for myself as they represent the ZD type which had buffers and dual couplings. This required the use of longer shank couplers on the models so they can still be coupled to other buffered stock without buffer-lock becoming a problem. Finding suitable decals to code them as ZDs was also a small problem but after raiding the decal box I found something suitable (even if slightly too big).

Because this blog was in hiatus when I started building them, here is a couple of photos prior to painting: 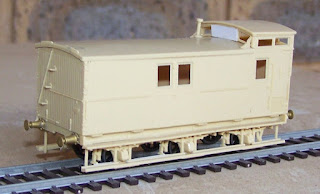 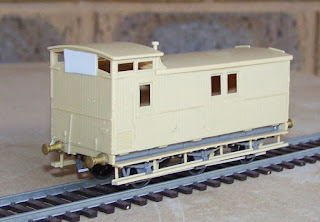 And here they are painted, decalled and with the couplers fitted: 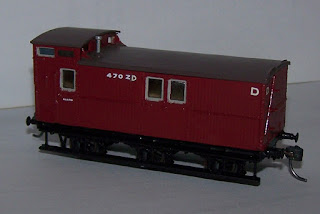 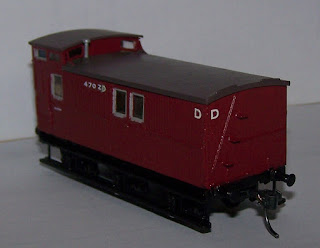 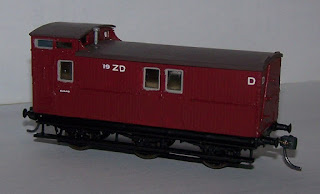 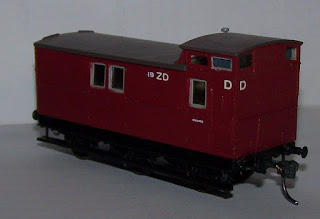 For those with a sharp eye you will note that one van (470ZD) has the standard flip-top axleboxes while 19ZD features split-pan axleboxes (which is why the bottom running boards are a bit higher). They are now ready for the patient client who can run them with the 4 W cars I did for them earlier as a complete set.

The next likely job will be finishing the 3 M cattle wagons which will clear my backlog of jobs a little bit.