It has been a while since I last purchased a new loco for the fleet. It isn't because I have everything I want, more that the budget could not be stretched enough and I was more focused on rollingstock projects.

That changed recently with an opportunity to obtain a loco representing a class I do not have in the fleet currently. So what loco is it?

Yep a H-class. Not Heavy Harry but the other H-class that the Victorian Railways operated. In essence a 3rd generation T-class but with a few refinements for shunting the Melbourne Hump. This model is from Powerline Models and is the first modern Powerline loco I have in the fleet (when the first batch of Powerline T/H-class models came out I ended up getting Austrains ones). 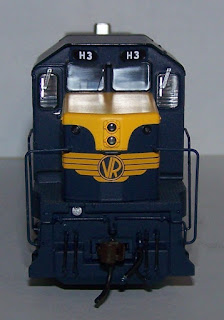 I have to concede that the Powerline one is better in a couple of areas: the livery seems to be a better representation of the Blue and Gold, there is cab detail and the air hoses look more realistic. In the let downs are the chunky looking uncoupling levers, the lack of numberplates with relief and a large 'bump' provided for full T-class plates to be pad-printed on the cab sides. Still it isn't too bad and one day I may even replace the uncoupling levers with some fine brass wire.

I mentioned in a previous post about the HD van with the brake cylinder initially fixed to the wrong side of the underframe. Here is a photo of it now in the correct position: 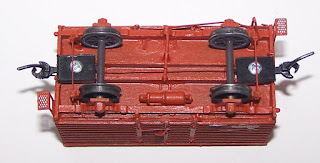 You can see where it was at the top of the photo. While it isn't perfect, you don't see this angle when the wagon is right side up on a layout so I'll live with it. Once again the photo highlights the grubby axles and wheels which is the extent of weathering I currently apply to my projects. Couplers are the Kadee #158 type with the snap-together draft boxes which I have come to like using. Because the beam between the brake shoes is in line with the mounting screws on the shorter wagons I leave the beams off until the model is painted, decalled and clear-coated. Once the Kadees are screwed on I then but the beams in and paint them.

Anyway that is it for this post. The next one will deal with the next project I'm currently working on.